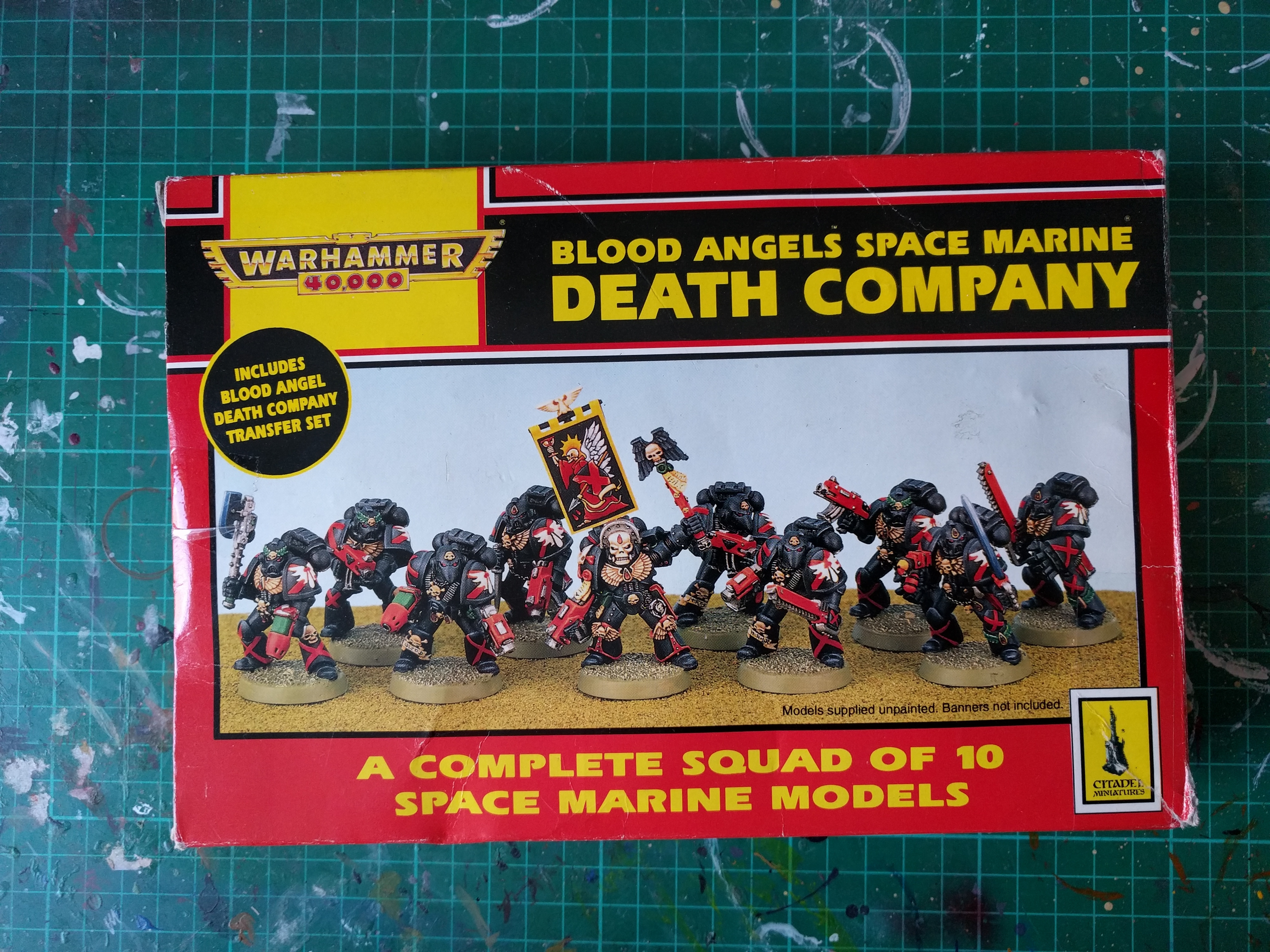 Opened with a slightly worn box, but all contents is 100% unpainted, unglued, uncut and new.

On the eve of battle, the Blood Angels pray and remember the sacrifice of their primarch Sanguinius while the Chaplains bless and study each battle-brother for signs of the Black Rage. Those who collapse into the Chaplains’ arms during the chanting of the moripatris are taken away to form the Death Company. Their Power Armour is repainted black with a blood red saltire symbolizing the wounds of Sanguinius and hung with devotional scrolls and records of honours earned before the madness took them. From this point on, these battle-brothers are considered dead men walking.[1a]

It is known that before the battle members of the Death Company gained access to the Chapter armoury so they may fight their last fighting with a weapon of their choice.[3]

Those few members of the Death Company who survive an engagement usually perish shortly after, either from their wounds or by the hand of the Redeemer of the Lost. Since the Red Thirst inevitably follows the Black Rage, the Chapter considers it a better fate than turning into a mindless flesh-hungry beast.[1a]

The advent of the Black Rage is associated with the end of the Horus Heresy, caused by the psychic shock felt by every Blood Angel when Sanguinius died at the hands of Horus.[1x] Prior to then, the Red Thirst was a rare but dreaded phenomenon, known only to Sanguinius and some members of his inner circle, including First Captain Raldoron, Sanguinary Guard Commander Azkaellon, High Warden Dahka Berus, and the Legion’s Master Apothecary on Baal. On the rare occasions when a Battle Brother was lost to the Thirst, his armour’s company markings were blotted out by black paint, and his geneseed was removed for analysis, rather than being returned to the Legion‘s stores.[2]

After Brother Alatros succumbed to the Thirst on Melchior, forcing Sanguinius to execute him, Raldoron applied the paint himself, swore the Apothecary, Meros, who had removed his geneseed, to total secrecy, and remarked to the corpse, “you are in the company of death. I hope you will find peace there.”[2]